The value of bitcoin surged when billionaire Ricardo Salinas Pliego said that his bank was striving to become the first in Mexico to accept the cryptocurrency.

Over the weekend, Mr. Salinas Pliego tweeted that he encourages the usage of Bitcoin. 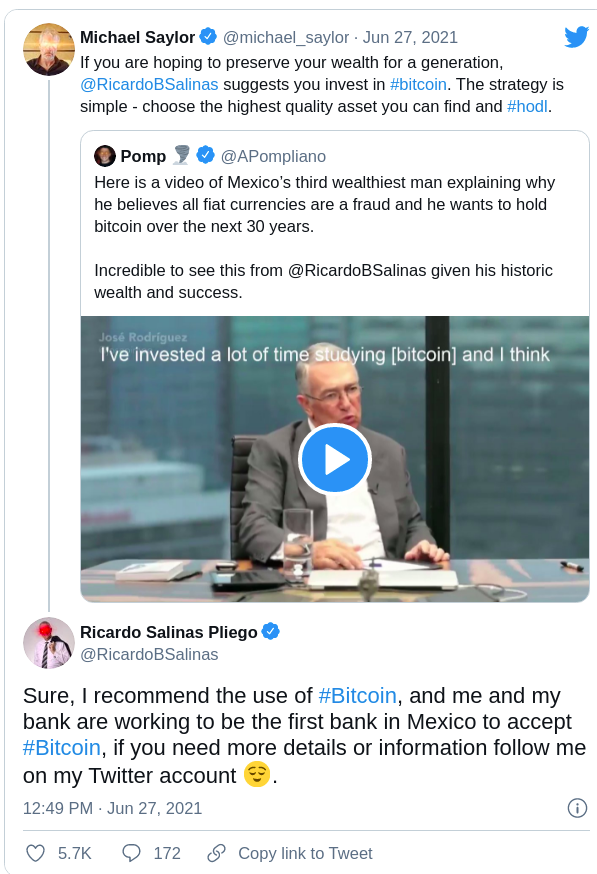 On the other hand, Mexican financial officials declared on Monday that digital currencies are not legal tender in Mexico and are not recognized currencies under current rules, threatening financial institutions that deal with them with fines.

The Bank of Mexico, the Finance Ministry, and the Banking Commission issued this statement after Mexican billionaire Ricardo Salinas Pliego stated on Sunday that his banking company, Banco Azteca, may start accepting bitcoin making it the country’s first bank to do so.

According to the statement, cryptocurrency is a volatile and speculative commodity that, while it may be traded, does not serve the same purpose as money “since its acceptance as a form of payment is restricted and they are not a reliable reserve or value reference.”

The crypto market began to settle down after weeks of losses, and this news may not be a piece of good news for Bitcoin in the short run.

Mine Crypto On Your Phone In Just 4 Hours. No Expensive Equipment Needed

Ankish is a finance graduate who specializes in personal finance, value investment, cryptocurrencies, and the stock market. During his college years, he was a team leader in AIESEC and volunteered for various social causes, traveling to several countries in Asia and Africa. He also worked as a tax analyst for PwC before launching a cloud-kitchen business, a successful venture that he sold in 2019. He currently works full-time as a writer and is also a stock and cryptocurrency trader and investor.

Ark Invest Files For A Bitcoin ETF With SEC

Despite the September Sell-Off, Here’s Why the Bitcoin Bull Run will Continue in Q4

On Chain Metrics for Bitcoin and Ethereum Show Bullish Flags

Twitter Adds Bitcoin Tipping and Plans to Expand it Into NFTs

After a Significant Bounce, Bitcoin Forms a Bullish Candlestick

Bitcoin Strikes A Fresh Monthly Low, What Can Stimulate a Bitcoin Turnaround?